I’m very grateful of the permission of Harald Enders to share his essay about the rosarium Sangerhausen. Please take a look at his website to see more of his essays. Over the last years Harald did a small number of essays on roses. Two of them were published in ‘Rosa Mundi’, the periodical of the Heritage Rose Foundation.

Given below is the text of his essay about the Europa-Rosarium Sangerhausen, published in ‘Rosa Mundi’, the periodical of the Heritage Rose Foundation. 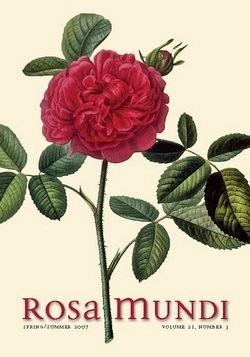 Together with L’Hay les Roses, today the rosary at Sangerhausen shows the greatest diversity of rose cultivars (6.800) [edit: according to Sangerhausen there are more than 8.300] and species roses (500). For now more than 100 years it attracts visitors from around the world. It is situated right in the center of Germany, zone 6. It extends along a shallow inclination facing downward northwesterly.

The first idea to this rosary came from the rose breeder Peter Lambert, the then secretary of the Verein deutscher Rosenfreunde (VdR), the German Rose Society, proposed at the General Assembly of the society in 1898. For Lambert, this rosary should be a refuge for roses and rose classes, which were threatened to fall into oblivion by the upcoming class of Hybrid Teas. It should also serve as a pool for rose breeders, so that parental material from old roses would be at the command of rose breeders if such a material would be needed. It was indeed a plan for a genetic pool.

Parallel to the design of the rosary, which in its formal part was designed by the garden architect F. Doerr, the collection of roses began. Appeals for the donation of roses were published in the Rosen-Zeitung, the Rose Societies periodical. This appeals were very successful. Groundwork and planting started in 1900. Already in 1902, prior to the opening, it showed, that the planned outline would not take all the roses, which were to be planted. So in 1902 more ground was provided. For this new area it was Peter Lambert who made the design which left the formal design of the older part in direction to landscape architecture. Finally in July 1903 the rosary had its Grand Opening.

In 1913, made possible by a mayor donation, further grounds could be bought adjacent to the rosary. This donation was made by a former citizen of Sangerhausen, who had emigrated to the U.S.

For many years, especially during the first decades of its existence, the ownership structure of the Sangerhausen rosary was quite unclear. While the grounds stayed in the ownership of the city of Sangerhausen, the roses were the property of the German Rose Society.

Very soon the purpose for the rosary was widened. It became one of the mayor testing grounds for newly bred roses of German origin prior to their introduction, and it became a safe harbour for roses, which were bred by amateur breeders whose roses would never make it into commerce.

Over all the years of its existence, the rosary was kept and brought forward by a relatively small number of men. It was Richard Vogel, former head gardener of the rose collection of Conrad Strassheim of Frankfurt, one of the great donators of roses for the rosary, who took responsibility for the assortment of the roses of Sangerhausen  and, as his successor, his son Max Vogel, who kept up the rosary with never ending passion during the depression era and WW 2. With only a very small number of hired hands – funds were hard to raise during the depression and WW 2 – they kept alive and going the rosary, with working hours, witch often exceeded 16 or 18 hours a day.

During Cold War times the political relationships between West and East Germany were extremely difficult. This finally led to the building of the Berlin Wall and the complete closing down of the Iron Curtain, making it impregnable from both sides. Journeys from the western to the eastern part of Germany were not possible. It was in the early 1970ies, that for the first time since 1961 visitors from the West were allowed to visit Sangerhausen and the rosary. The direct exchange or donation of roses still was not allowed. Many then new cultivars reached the rosary by a detour through Poland, whose connections with both Germanys were not as difficult as they were among them.

During a certain period in its history, the decision was made to plant all the collected polyantha roses together. So in a certain part of the rosary, nearly half the size of a soccer field, about 800 different polyantha cultivars were planted together. This gives a really amazing view. A great achievement of the 1970ies was the restructuring and the renewal of the extensive irrigation system which secured a sufficient water supply to the roses and the trees.

After the re-unification of Germany the last and until now largest revirement of the rosary took place. At the former back end of the rosary, the new main entrance was built. The oldest part of the rosary, the one which Doerr had designed, was rearranged, smaller parts of this place now hold the rose heritage of the former GDR from the years 1950-1990. The mayor part was changed to a park-like structure due to the problem of the soil fatigue for roses, a phenomenon, not yet understood in full. This new main entrance area holds modern accommodation for the tourists, a restaurant, a lecture hall and a rose and souvenir shop. Today the rosary measures 12,5 ha (which is about 31 acres).

All this was accomplished to meet the demands for the new concept of the rosary, to be, apart from the task of the preservation of roses, a mayor recreation place for tourists. The new name, which came with the revirement and the modernization, is “Europarosarium Sangerhausen”. In the 1990ies more than 5 million $ were spent on that. Today the rosary is owned completely by the city of Sangerhausen, which in co-operation with the provincial administration and the Federal State provided the money.

Many of, as I like to call them, hardcore rosarians, look down on those tourists which can not distinguish a Floribunda from a Gallica, a Hybrid Tea from a Damascena, and just love the  overwhelming view of tens of thousands of flowers in June and July. But remember, without them, and their entrance fees, just with us hardcore rosarians, the rosary could not exist for a week.

On the occasion of the 100th anniversary of the Sangerhausen rosary, the VdR and the foundation “Friends of the Sangerhausen Rosary” donated a special rose garden to the rosary. Designed in a classical rosary design and optically separated from the rosary, its aim is to show the development of the roses in the last 100 years – with roses, of course. About some of the cultivars selected for this Anniversary Garden it may well be discussed, but the appearance really is fantastic and a real marvel.

What makes the rosary of Sangerhausen so unique in its appearance is the kind of keeping the roses, especially large climbers and ramblers. Born out of need, place was always too short at the rosary, the climbers and ramblers were bound to stakes, made from the stems of younger fir trees. This tradition is kept up until today, only slowly replaced by metal rods.

But of course Sangerhausen is more than rambler walls and many roses.

Sangerhausen today contains and keeps mayor parts of the worldwide rose heritage. Many cultivars exist at Sangerhausen only. For nearly 40 years after its opening, the rosary collected and planted whatever new, or old, rose was available.

Since some years, serious efforts are made to review the roses at Sangerhausen, to verify or falsify the correctness of the naming of the roses exhibited. But this is slow work, time- and money-consuming work and it will take some time, before final results will be introduced.

I had the opportunity to talk about the present status and the future plans for the Europarosarium with Thomas Hawel, Head of the Sangerhausen rosary. In this interview he stated, that the main goal of the rosary today is – and in the future will be –  the preservation of the existing rose collection in its present complexity, together with the acquisition of newly introduced roses. To achieve the preservation goal, any effort is made. So the own nursery of the rosary for example propagates hundreds of different cultivars each year to ensure the existence of those cultivars at the rosary itself, just to be able to keep the status quo of the collection. Furthermore extensive exchange programs with other rosaries and organizations and private persons are arranged, to, on the one hand regain cultivars which were lost at Sangerhausen during the decades, and on the other hand to contribute to the efforts to ensure the survival of cultivars, which never before were at Sangerhausen. So not too long ago, propagation material of a large number of cultivars was taken for propagation from the Roseto Carla Fineschi at Cavriglia, the greatest private collection of roses known.

When I asked T. Hawel, if the worldwide economic crisis has found reverberations in the rosary, he denied it and said that on the contrary in 2009 wore than 132.000 visitors were at Sangerhausen, more than ever before in one year with only the exception of 2003 on the occasion of the 100th Anniversary of the rosary.

Asked for his staff, T. Hawel answered that 32 persons in total work at Sangerhausen. Of these 32 persons, 27 work as gardeners, keeping the grass short, the roses trimmed and watered and the rose beds free from weed. Since 2009 the Europarosarium Sangerhausen is member and part of the German project for  saving the genetic biodiversity in ornamental plants. This project was installed by the Federal Government of Germany in order to catalogue and preserve the still existing horticultural heritage.

According to T. Hawel, in the future more scientific work on roses will be done again at Sangerhausen, this in the tradition of the former Rosenforschungsstelle (Rose Research Center) of the 1940ies were Harald von Rathlef did his research work. So for instance together with the Martin-Luther-University of Halle further research on the stress on roses by climatic conditions is planned and with the Hanover University research on the species rose collection is prepared. 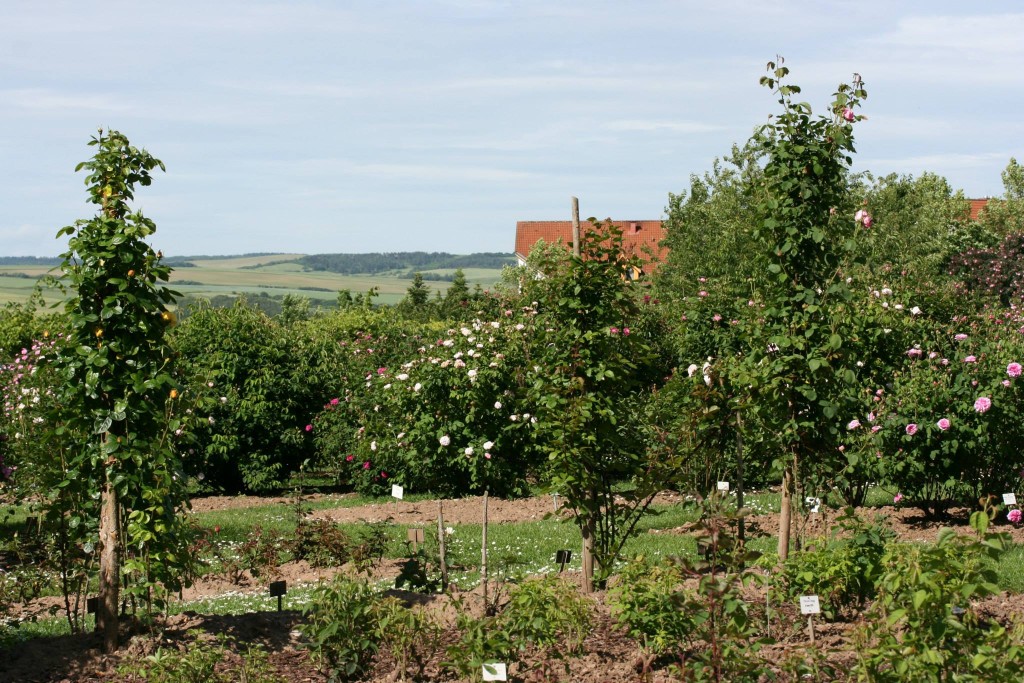