The name of this group of old roses is derived from the parent strain Rosa x centifolia. Centifolia roses have also been referred to as cabbage roses, not because of their smell (which is heavenly), but the compaction of their petals. Other names are ‘Provence rose’, ‘Dutch rose’ and ‘Rose des Peintres’. When the round buds open the many petals move outward and then reflex around the perimeter of the flower to reveal a quartered formation with a green button eye at the centre. Centifolias were at one time extensively grown for the manufacture of French perfume, but their oil had proved to be of a lower quality than that of Dasmak roses. It is these roses which appear in many of the masterpieces of the Dutch flower painters, such as Gerard van Spaendonck (1746-1822) of the 17th and early 18th centuries, hence the name ‘Rose des Peintres’. 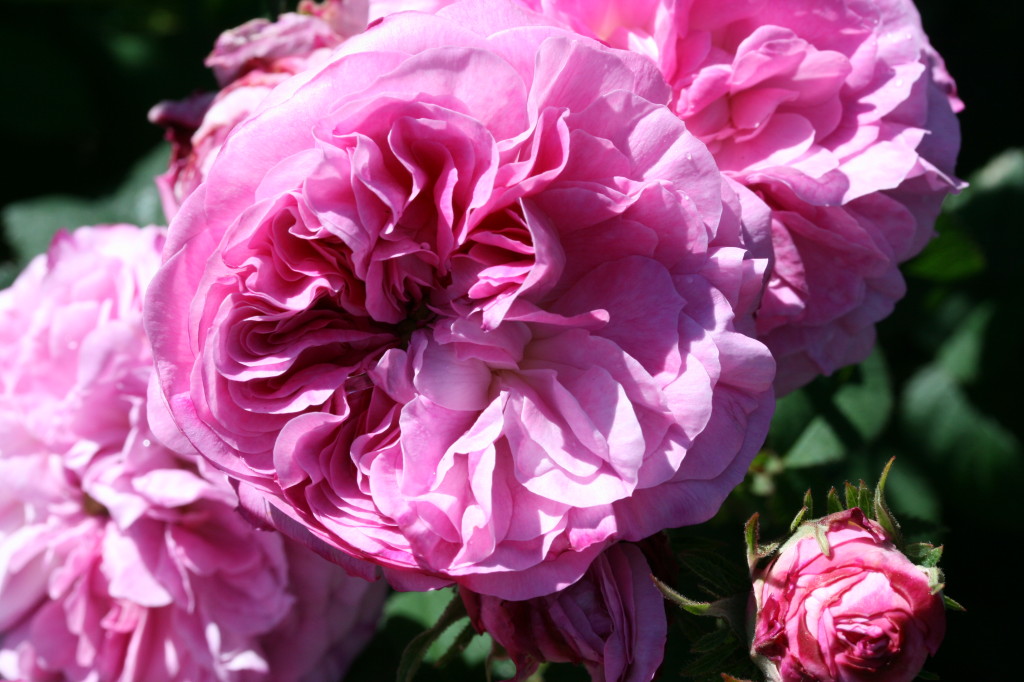 R. centifolia goes back to the earliest days of history, but botanist have not reached any agreement as to its origin. Is it a true species or a hybrid? Having been so long in cultivation, its occurence in the Caucasus is held by some to be more likely an escape from cultivation than an evidence of natural origin.
Roessig considered it a Canina ‘improved by years of cultivation’, Regel, a similarly ennobled descendant of a Gallica; and Crepin agreed with this. To the gardeners eye it has more in common with Gallica than Canina, but its Eastern origin, points strongly to its being a distinct species. If of Gallica descent, one wonders why it has never shown the dark red coulour this rose has so often produced, even back in Roman days.
Its general characters serve at once to distinguish it from other varieties, the large pendulous cupped flowers contrast with the flat erectly held Gallicas, which most nearly approach it. The leaves are large and deeply cut, usually hanging a little loosely from the petiole, less thick than the Callicas, and always edged with red glands. The thorns are large and curved downwards, usually of several sizes and mixed with bristles. The Gallica thorns are on a much milder scale, and are short and usually straight and dark red when young, giving the shoots a spotted appearance, which the Cabbage Rose does not have. The hip is large and oval, not so round as in Gallicas. Most of the varieties are hardy and of vigorous growth and do well in most soils, but they will not show their best unless well treated; in fact, they should have the same treatment as our modern varieties. They mostly grow to large bushes, and respond to fairly hard pruning. [Edward A. Bunyard, Old garden roses]