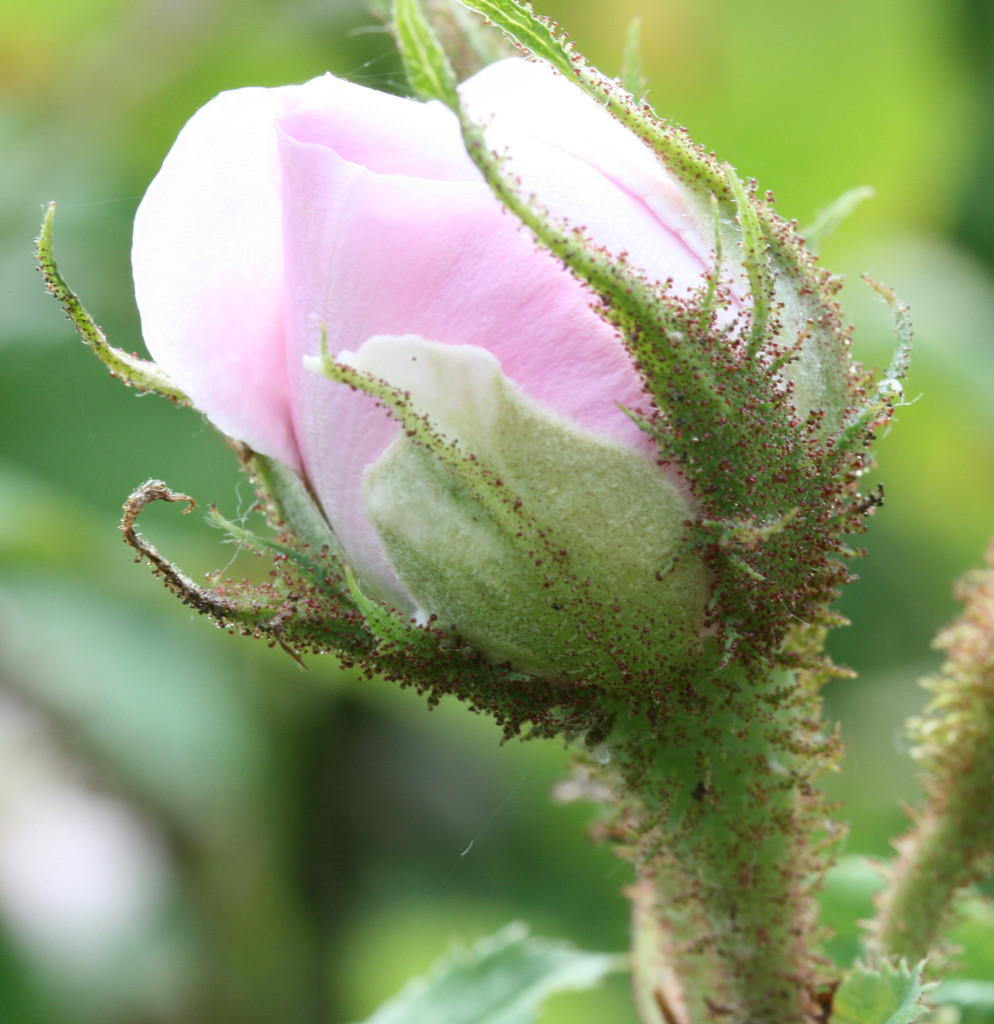 Moss roses differ from all other roses by the mossy beards, that form around their calyces, flower stalks and sometimes their leaf stalks and stems. They are covered with greenish or brownish glands which, like moss, feel soft to the touch. These glands are sticky and the substance that is secreted is heavily aromatic and smells of resin.

The legend of the birth of the Moss rose is to be found in a popular Calvados legend. ‘One day the Angel, who each day brings the dew on her wings, feeling weary, asked the Rose for shelter for the night. On awakening, she asked how this hospitality might be repaid. The Rose answered, “Make me even more beautiful”. “What grace”, said the Angel, “can I give to the most beautiful of all flowers?” Meditating this request, she cast her eyes down to the mossy bed from which the Rose sprang and, gathering some, placed it on the young buds. Thus was born the Moss Rose.’ [Edward A. Bunyard, Old garden roses] 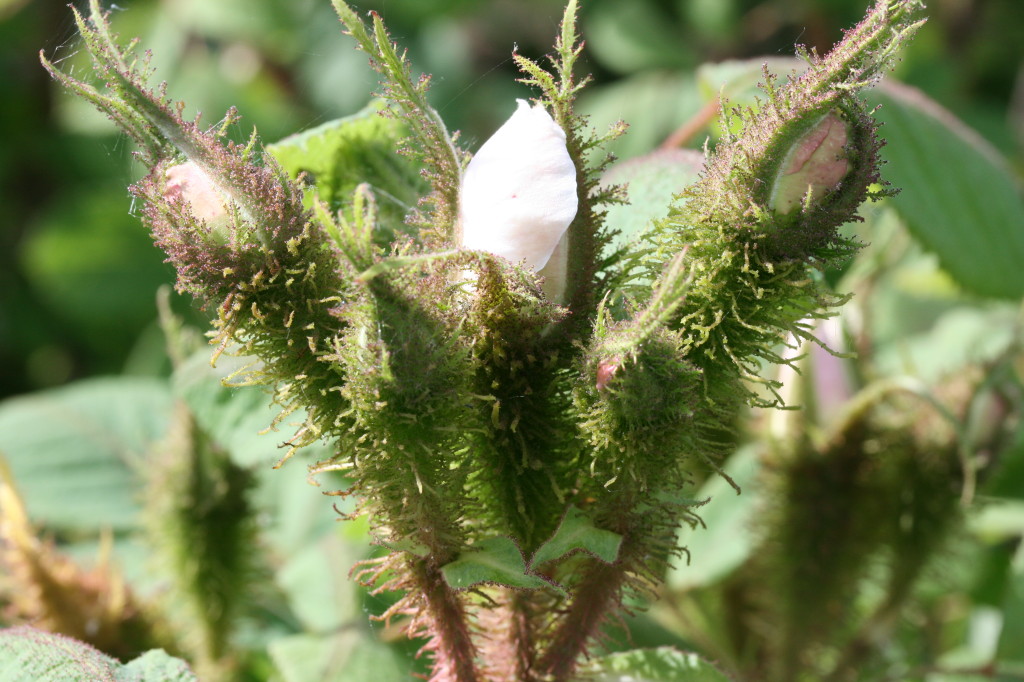 The history of the Moss rose is still somewhat of a mystery, but we are quite sure that ‘Common Moss’, one of the most beautiful of all the Moss roses, is clearly related to Rosa x centifolia. Many times in history the Moss rose has thrown out a sporting branche without moss, having al the marks of the Centifolia rose, The moss is a proliferation of the glands which always are present in Centifolia roses. We therefore should expect to find mossy varieties of other kinds of glanded roses, and this is the case. The Sweet Briar, whose scented leaf glands make it a favourite the summer trough, has produced a similar variety, which is figured in Roses; Or, A Monograph of the Genus Rosa, by Henry Charles Andrews, the double Mossy Sweet Briar:

“Rosae Eglanteriae muscosae (Mossy Eglantine Roses): These Eglantine roses are rather delicate plants, and difficult to preserve. The palest-coloured is known by the appellation of Manning’s Sweetbriar, being first raised by a gardner of that name. It is also by some called the Mossy Sweetbriar. The other plant is called the Double Mossy Sweetbriar, and we have never seen it in any other collection but that of Messrs. Whitley and Brames, whence our figure was taken in 1810, and where we have often seen it flower with semidouble and monstrous flowers crowded with petals on the same branch; a strange character in blossoms, not easily accounted for.” 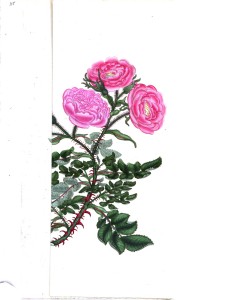 According to Edward A. Bunyard, the Moss rose first appears in Holland in the early 18th century at the Botanic Garden at Leiden. He is able to fix the date within a few years, as it is first mentioned in the Catalogue of this Garden in 1720, where its Latin name was Rose rubra plena spinissisima, peduncolo muscoso. An earlier edition of this catalogue was published in 1710, but it is not there mentioned, so that it probably came into Holland between 1710 and 1720. It need hardly be said that this statement has not been unchallenged. In 1845 a Frenchman, M. Faguet, came forward with a claim for his own country as the onlie-begetter of the Moss rose. Faguet was the author of a work entitled Choix des Plus Belles Roses, published in 1845, and it is in this volume that the French claim is made. He refers to a book by Frerard Du Castel, entitled L’Ecole du jardinier Fleuriste, in which it is said that the Moss rose had been known so far back as 1696 at Carcasonne. From thence it is stated that Du Castel took it to Normandy in 1746, thus the Dutch record was antedated by many years. Du Castel’s work is very scarce, and, Bunyard imagines, was not seen by many writers on the history of the Rose, or they would have found, as he had done, that it contains no mention of the Moss rose at all, or of Carcasonne. There are two editions of this work, but neither contains any mention of the Moss rose. Bunyard thinks therefore that the Dutch record must stand, as he further explains in his book Old garden roses. 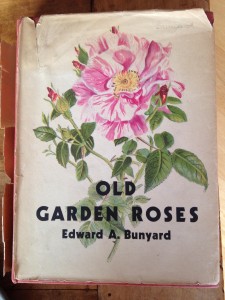 By grafting or budding of the branch on which the mossy buds were present, further Moss roses where raised. Only after the discovery in 1807 of a single flowered pink Moss rose could Moss roses also be propagated by seed (the large double flowered forms were sterile). The seedlings of these roses however lack the exquisite quality of the true Centifolia roses, except in the few that are direct sports, e.g.  Rosa x centifolia ‘Muscosa’ (‘Common Moss’) and ‘Alba’. Some of the  later varieties (after 1800) flower again, after the summer outburst is over. In size the Moss roses range from the dwarf varieties like ‘Little Gem’ or ‘Alfred de Dalmas’ to tall pilar roses like ‘William Lobb’.

Most Moss roses were raised during the 19th century, mainly in France. William Paul, author of The Rose Garden (1848), mentions in his first edition 84 different Moss roses, but not as many where supposed to be left. Recently however, I discovered that in the Europa-Rosarium Sangerhausen still some 130 different Moss roses are grown, so there are nowadays luckily more then the afore mentioned 84 Moss roses. The colors of Moss roses varies from white (only but a few) to deep purple and various shades of pink and red. They smell as heavenly as the Centifolia roses, but the resinous fragrance of the moss gives it an extra dimension. Often the leaves are bronzed, especially with the darker colors. The branches are densely covered with hairy spines, which pass into moss on the flowers stalks. 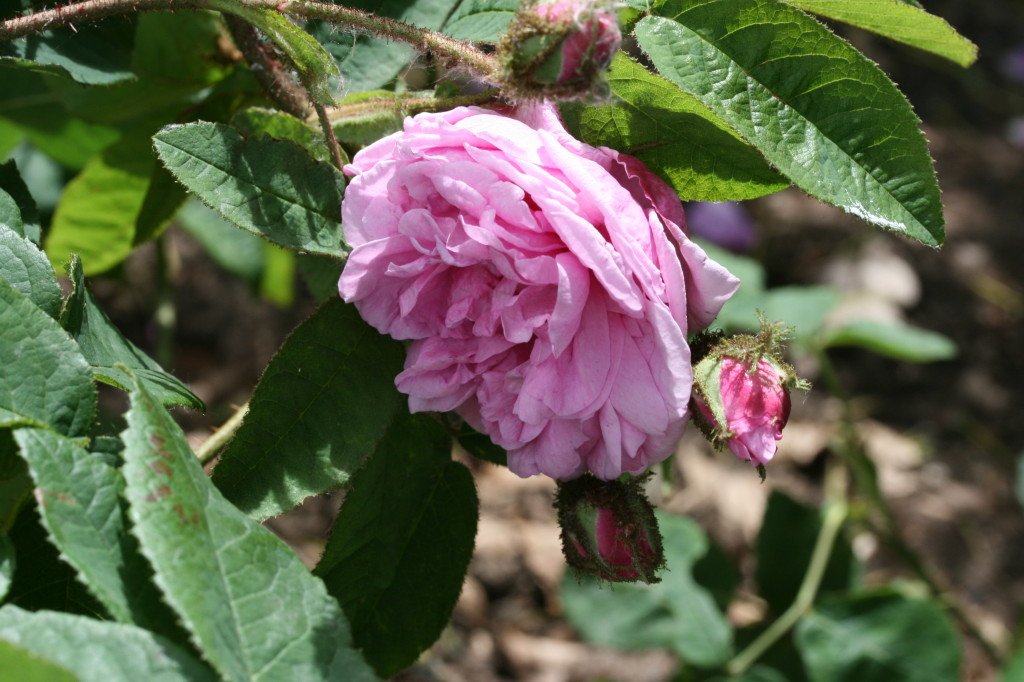 The diversity in the rank of Moss roses is so large, that it is not difficult to find one for the garden. It is a good idea to plant these roses along the sides of borders or paths, where the mossy buds can be touched or brushed against in passing, releasing their aromatic fragrance. 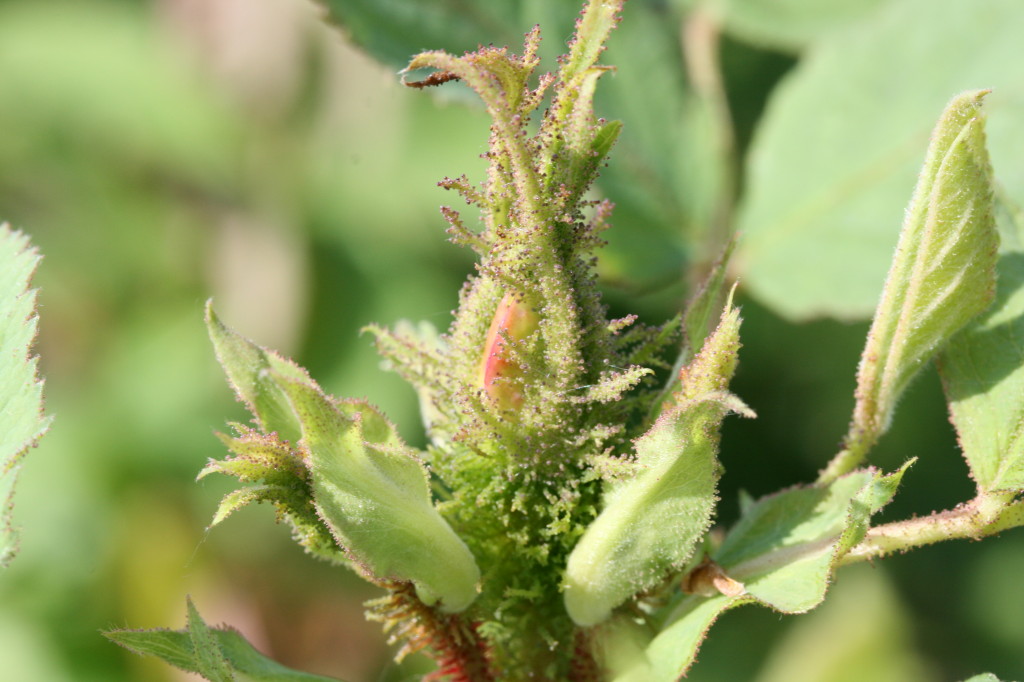 See also the article by Major C.C. Hurst, Reprinted from the Journal of the Royal Horticultural Society, 1922