Botany, a great help for recognizing the different groups

‘Any gardener, whose eye is alert to note the differences between one plant and another, will recognize such a distinct group as the Albas, with their flat grey-green leaves and vigorous growth. For the more difficult groups, the Gallicas, Damasks and Centifoilias we must go a little further into the details of leaf and stipule, flower and hip, and still more so when we wish to separate the varieties of any family and name them.

Upon the vigor and direction of the shoots, the height and form of the rose finally depends. They may be strong and upright as in the Albas, making a large spreading bush, or short and erect as in the Gallicas. Their colour is also a useful indication, green as in Alba or red in Centifolia, etc. Most distinctive of all are the different types of thorns, bristles and glands, which give the character to each variety and enable us to say -even in winter- to which family the variety would belong. 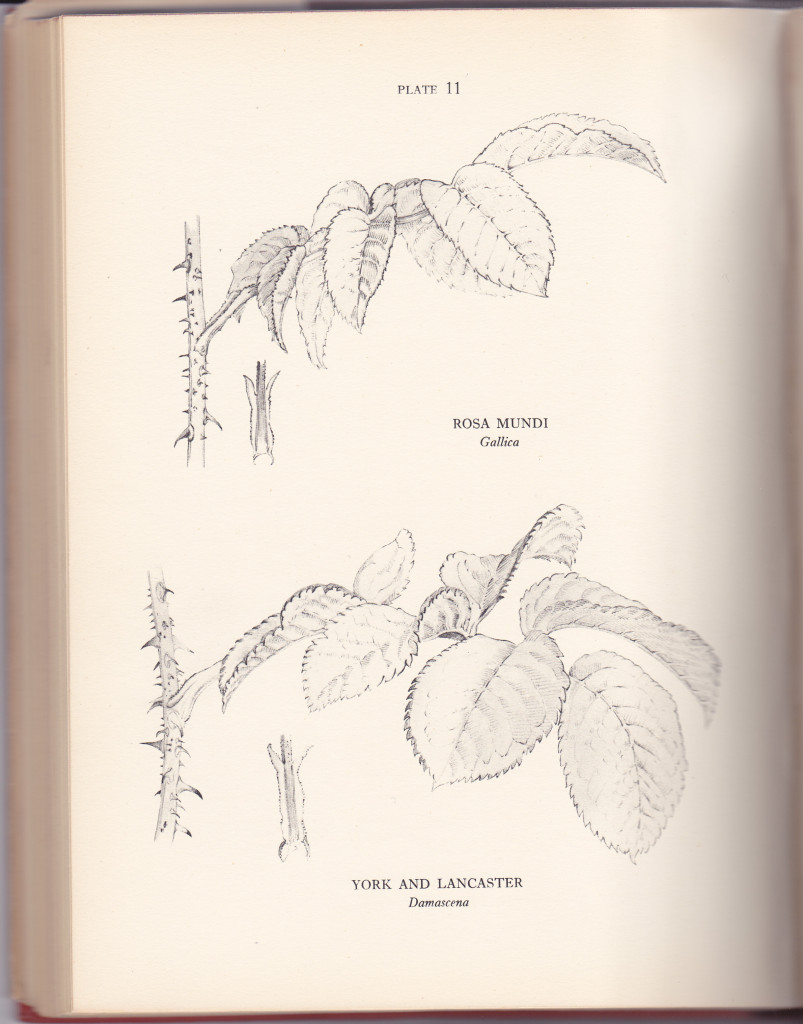 Thorns are most readily discerned and range from the broad-based, curved thorn of the Teas and Briars, to the straighter Albas and the thin, straight, bristle-like thorns of the Scots Roses. When more slender than these they become bristles and perhaps a ready distinction can be made as to the dividing line, a thorn is stiff and immovable, a bristle can be moved as the hairs in a brush. When the bristle ha a small round head which creates a scent, as Sweet Briar, of even a more sticky gum for the discouragement of ambulant insects, it becomes a gland. The presence or absence of these forms of defence enables an admirable quick classification to be made.

The strong shoots which spring from the base of the plant are often more bristly or thorny than the branches which grow higher up on the plant, but in many cases they shed many of the bristles so that in a large rose the oldest stems often show thorns only. 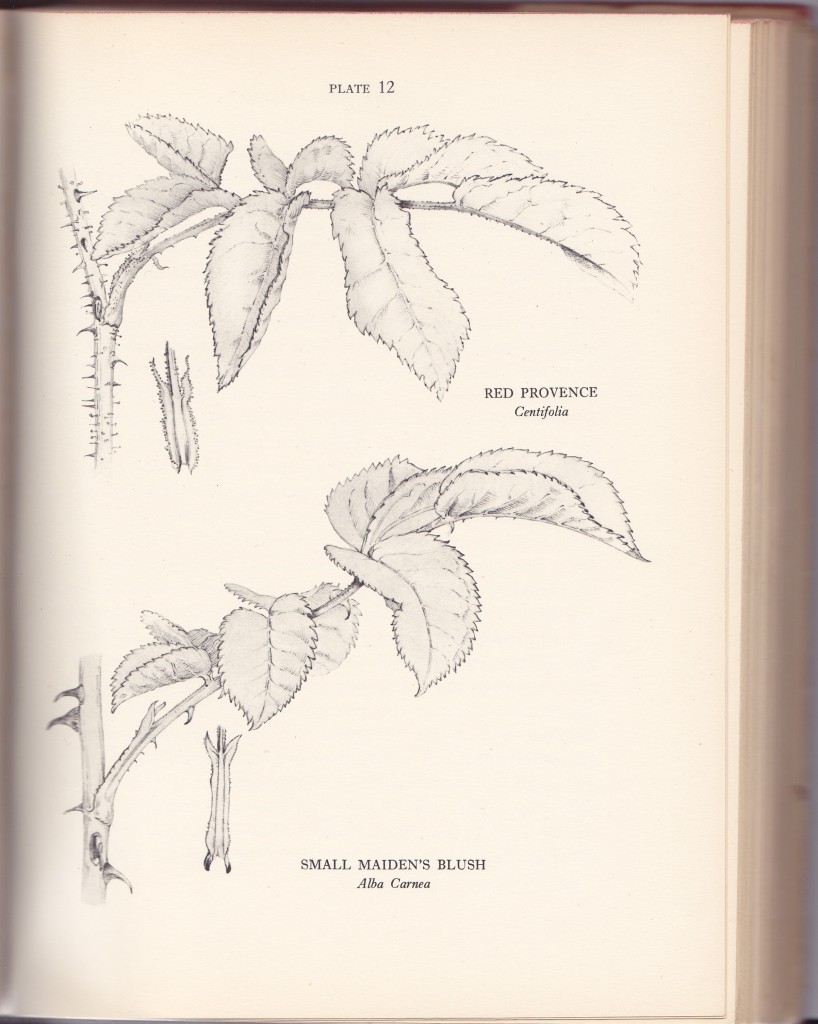 Leaves differ in colour, shape, pose, etc, and are even more useful than flowers in placing a variety in its right group. The surface will vary from the smooth, shiny Teas to the gray, downy Albas; the upper and lower surfaces may be smooth or downy, in the Gallicas and Centifolias they are markedly different in colour, forming a ready means of placing these. The size and shape of the individual leaflets vary enourmously and give at once the peculiar individuality of each. They may be held out flat as in most Albas, hanging down as in Centifolias; the edges flat or waved. The individual leaflets may be flat, folded up, or cupped or a blend of these, such as down hanging and flat, or down hanging and folded up like a half-closed book. Cupped denotes that each leaflet has its margins like the edge of a spoon, the centre vein lower, as in Alba Celestial.
The nodging of the edge of the leaf is from coarse to fine, and the actual teeth may be straight sided as in a saw or, as more common, curved-serrate. The edge of the leaf may be set with glands, a special mark of Gallicas and Centifolias.

The petiole or main stalk of the leaf will be smooth or downy or set with glands or thorns. At the base of this leaf stalk is a small winged leafy structure known as the stipule. This is a very useful guide in determining varieties. It varies greatly in the different groups, and to some degree between varieties of the same groups. The breadth of the stipule often varies, some being almost leafy as in the Albas. The edges are often set with glands as in Gallica and Centifolia, and sometimes fringed. The stipule may be held out flat or folded upwards over the leaf stems to which it is joined over a part or most of its lenghts, then being called adnate. The tips are free and assume various forms, sometimes horned, pointing inwards or the reverse. From the main shoots or branches proceed the branchlets on which the flowers are borne, and these have the peculiar characteristic that their surface may be glandular or thorny for a part of their length only. The point at which this division takes place is marked by a curious ‘bract’ looking like a malformed leaf. From above the bract is the foot stalk of the flower known as the pedicel, which swells at the top to produce the seed or hip.The pedicel may be smooth, bristly or glandular or mixed, and this armament may continue all over the hip or stop at its base. The smoothness or otherwise of the hip is a good point to study; Always smooth in the China roses and very bristly in most Albas.

At the top of the hip are the sepals enclosing the unopened bud. These may be smooth, hairy, or glanded as the hip or pedicel, or they may have an arrangement of their own. These calyx lobes are very important in naming varieties. They may extend beyond the flower petals of the unopened bud, and sometimes their tip is prolonged into a leafy blade. At the side of each calyx lobe will be seen certain side wings which have exercised curiosity for many generations. One of the old monkish puzzles, so popular in the Middle Ages, ran as follows:

‘We are five brothers at the same time borne.
Two of us have beards, by two no beards are worn
While one, lest he should give his brothers pain,
Has one side bearded and the other plain.’ 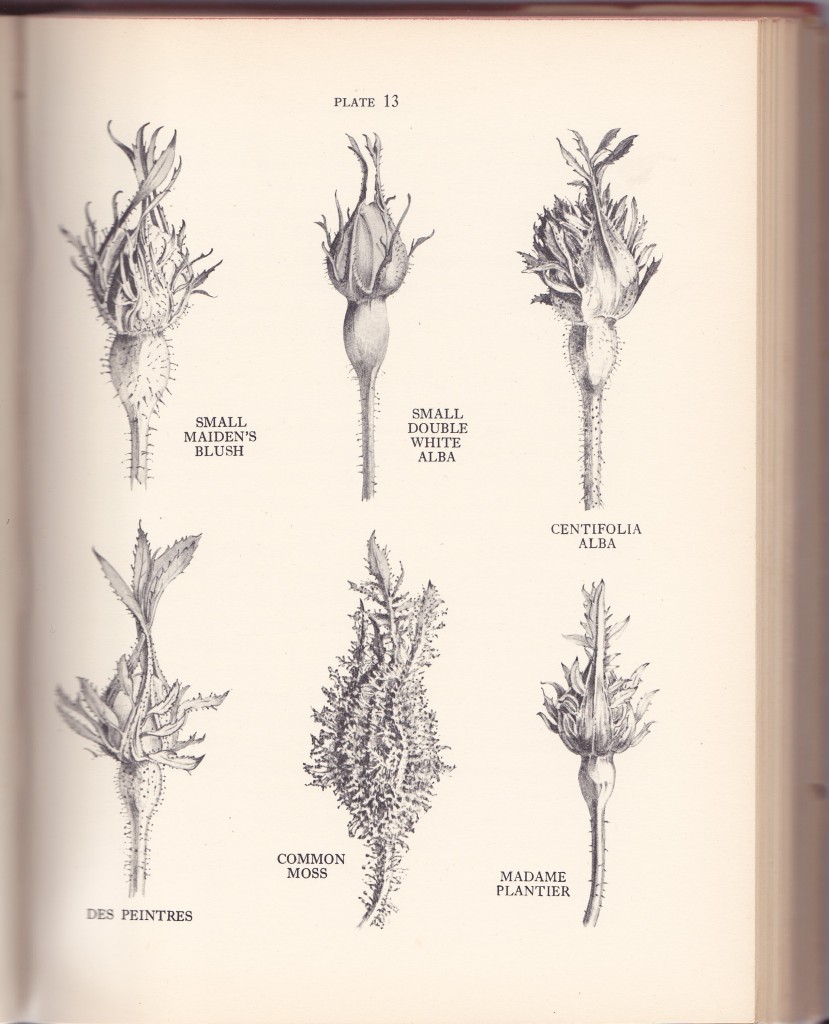 A close look at an unopened bud reveals why this apparent unfairness is unavoidable. Only two lobes can have both outside edges free to grow beards, one has one free, and the other two are covered in and thus beardless.
These ‘wings’ are very good marks of recognition. China and Gallica roses rarely develop them so strongly as the Centifolias and Albas do. They are quite regularly developed except that the central flower shows a certain exuberance of development compared with its neighbours, which branch off at the side.’